Tim Storr obtained his B.Sc. from the University of Victoria and his Ph.D. from the University of British Columbia in 2005 working with Prof. Chris Orvig. He then pursued postdoctoral studies with Prof. T. Daniel P. Stack at Stanford studying metalloenzyme mimics. In 2008 he joined the faculty at Simon Fraser University where his inorganic chemistry research program targets the development of bimetallic systems for catalysis, and the investigation of site-directed therapeutics for neurodegenerative disease. He constantly attempts to keep track of all the great people listed below!

Khrystyna received her BSc degree in Chemistry in 2012 from Ryerson University located in downtown Toronto. She completed her MSc in Chemistry in 2014 at Ryerson University, under the supervision of Dr. Robert Gossage, working on the synthesis and coordination of pincer ligands. Khrystyna is thrilled to join the Storr group. Her research looks at the metal complexes with redox active ligands and their catalytic activity. 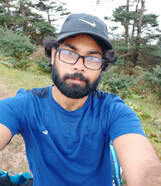 Samyadeb Mahato - PhD Student
Samyadeb received his Integrated BS-MS degree in Chemistry from Indian institute of Science Education and Research Kolkata (IISER Kolkata). Back in summer of 2017, he did a project in the Storr Lab as a Mitacs Globalink Research Intern. The fond summer-memory largely inspired him to rejoin the Storr Group as a graduate student. His takes interest in understanding the catalytic activity of certain red-ox active transition metal complexes.  Apart from academia, he likes to introduce himself as solivagant. He goes on treks whenever he can, to push his limits and to find solace in the hardship of life.

Diego Martelino - MSc Student
Diego moved to Canada from Manila, Philippines and earned his B.Sc. at the University of Victoria in 2016. His work looks at the electronic structure of metal complexes containing redox active ligands and their use in catalytic functionalizations. When not in the lab, Diego can be seen hitting the slopes or cracking a cold one with the boys.

Janaina Bataglioli - MSc Student
Janaina received her BSc degree in Chemistry in 2016 from University of Sao Paulo in Brazil. She first came to Vancouver in 2013, when she studied at Douglas College. After getting her BSc, she decided to move to Vancouver again, and she joined the Storr Group for her MSc, with a focus on the influence of Ruthenium complexes on Alzheimer's Disease.

Romain Kunert - PhD Student
Romain obtained his Master’s degree in Chemistry for Life Sciences at University Grenoble Alpes in France in 2018. During his Masters, he joined Pr. Tim Storr’s lab for a 5 months internship as a collaboration with the Grenoble Molecular Chemistry Department Lab. He is now in a joint PhD between the two labs on the development and characterization of redox active ligands and their use with abundant transition metals.

Past Members...gone but definitely not forgotten!